Earlier today we reported that at least when it comes to spending at restaurants, the stimulus effect was wearing off. But while that may have been true in January, in February things appear to be picking up.

According to the latest data based on aggregated BAC credit and debit card data, spending jumped by a brisk 9.7% Y/Y for the 7 days ending Feb 6th, which means that since the beginning of the year, total card spending is running at an average of 5.6% Y/Y pace, up notably from the Dec average of 2.5% yoy as a new round of stimulus checks is being spent.

A look at spending by geography, there was a particularly large gain in card spending in California with total card spending of 9.5% yoy for the 7-days ending Feb 6th, up from -1.1% yoy the week prior. 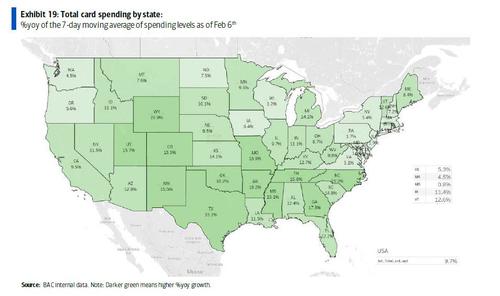 The gain was driven in part by brick &mortar (B&M) retail and restaurant spending, which likely reflect the easing of COVID-related restrictions in the state.

While spending in California jumped, the Northeast was hit by a major snowstorm on Feb 1st, resulting in a noticeable pullback in spending in NY, NJ, and PA – total card spending contracted yoy on Feb 1st when the rest of the country saw little change in trend. 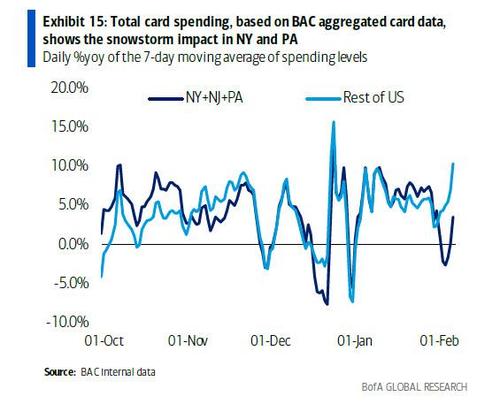 There was also meaningful strength in apparel and furniture spending in CA. As a result of the strength in CA, card spending in all of the major 20 MSAs is now positive yoy 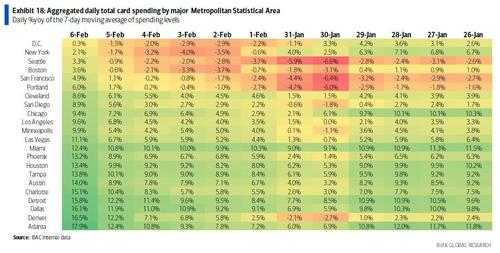 Additionally, there was a meaningful improvement in higher-income spending, which could reflect greater engagement in leisure spending. 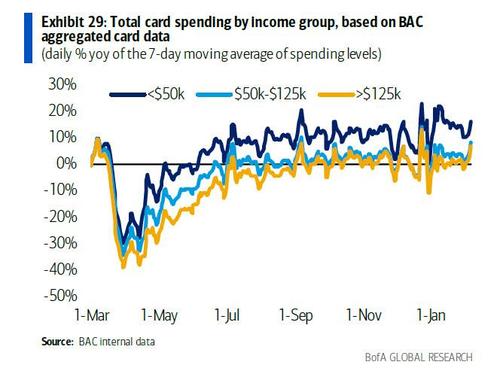 Looking at the components, retail sales ex-autos increased 4.6% mom SA, offsetting the last three months of declines on a mom basis. The gain was driven by discretionary spending – department stores, furniture, and clothing – which we found to be supported by stimulus payments. On the other side, there was a meaningful drop in card spending on airlines, showing a weakening in airline bookings following the holidays.

An interesting, if expected, divergence emerges when looking at restaurant spending in states with and without dining restrictions. 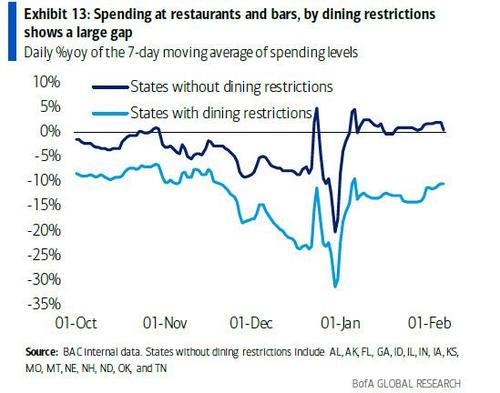 BofA also looked at data on returns, where it observed normal trends with the exception of furniture and building materials which were elevated, potentially reflecting a shift toward online shopping and flexible return policies amid a strong housing market

Finally, looking at the monthly average, BofA finds that retail sales ex-autos increased an impressive 4.6% M/M seasonally adjusted for January, setting up for what the bank expects will be a blockbuster Retail Sales report next week on February 17th.

Did you miss our previous article…
https://greatsurvivaldeals.com/8-million-more-living-in-poverty-9-million-small-businesses-in-danger-of-closing-10-million-behind-on-rent/