EDITOR’S NOTE: Be ready! This could be the advent of COVID-21 to cause even more restrictive lockdowns.

As we previewed over the weekend, a new study suggests that AstraZeneca’s COVID vaccine, developed in partnership with Oxford, is significantly less effective at preventing patients from being infected by a new “variant” – aka mutant – strain first isolated in South Africa. We posited that the new data could be used by European regulators, as well as regulators from elsewhere, to justify another round of lockdowns and other restrictions even as cases and infections continue to decline worldwide. 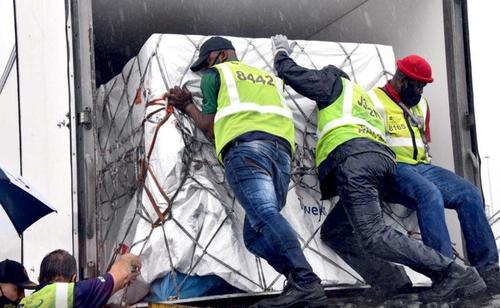 Already, it’s looking like that assessment was correct. Because on Monday, Bloomberg reported that South Africa had suspended its vaccination rollout until developers finish working on the highly educated.

Meanwhile, Sarah Gilbert – whose name readers may recognize from her overly optimistic projections about when the UK’s AstraZeneca jab might finally be ready to face the FDA -a few months back  – is already doing it again, telling Bloomberg that the new jab should be ready to go by the fall. Of course, AZ’s jab isn’t the only one developed in the West to show less-than-ideal data so far.

“It’s easy to adapt the technology,” Gilbert said in an interview with the BBC’s Andrew Marr show Sunday. “This year we expect to show that the new version of the vaccine will generate antibodies that recognize the new variant and then it will be very much like working on flu vaccines.”

Readers can watch footage from the interview below.

Oxford Vaccine lead researcher Prof Sarah Gilbert tells #Marr the #CoronavirusVaccine has a “reduction in efficacy” against the South African variant but “there is still protection against deaths, hospitalisations and severe disease”https://t.co/bQfOn3vEfS pic.twitter.com/g7dX4oO7D6

Although vaccine makers said their shots appear to maintain efficacy against the UK variants, pharma companies are racing to develop booster shots against new strains, because AZ isn’t alone here. Other Western jabs, including one being manufactured by Novavax and another being manufactured by JNJ, have published data showing a surprising lack of efficacy against the South African mutant, which is increasingly stoking concerns about another wave of the virus even after the first wave of vaccines has been made widely available.

South Africa’s Health Minister Zweli Mkhize said on Sunday that the government would await advice on how best to proceed following the disappointing trial data on the 501Y.V2 variant that caused a second wave of infections starting late last year. Recent data shows that an overwhelming number of the new cases being diagnosed in South Africa are tied to the new variant.

In words that should trigger goosebumps in every individual who has reached their breaking point when it comes to the current state of perpetual lockdown, one government epidemiology advisor, Professor Salim Abdool Karim, warned that there needs to be a new approach to immunizations, given the uncertainty about how effective current vaccines would be against the 501Y.V2 variant. These words seem to validate the criticisms of the US government’s plan couched in the Great Barrington Declaration, which advocated a less-restriction set of measures.

Last week, an AZ executive vice president for biopharmaceutical research announced that expectations for the rollout would be scaled back.

All of this comes at a rough time for the EU, as Russia’s “Sputnik V” earns more accolades in the West. AZ, of course, isn’t alone. Even the leaders of the western vaccine race are rushing to revise their jabs to work more effectively against the foreign mutations.

That doesn’t exactly bode well for Europe’s vaccine rollout program, which has already been criticized for falling far behind the US, China, and other major powers.

Did you miss our previous article…
https://greatsurvivaldeals.com/building-a-backyard-homestead-the-beginning-phase/

9 Ways to Boost Your Immune System During a Pandemic